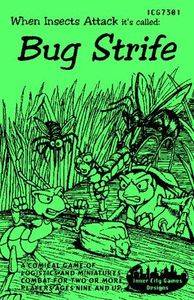 Bug Strife is a tabletop game that reminds me of many real time strategy games for the PC. Two or more players begin with certain bug forces and then, through food acquisition, hive construction and combat, establish their side as dominant on the battlefield. The book for Bug Strife is 33 pages of typing paper covered with a decently sturdy cardboard cover (monchrome green). Clip art and other cartoons are interspersed in the text and the rules are set out in a logical, well organized manner WITH a working table of contents. The last couple of pages are very useful and welcome play-aids that include a turn sequence summary, bug summary, unit cards and terrain effects table. In addition to a playing surface you'll need 6-sided dice (d6), tape measures or rulers, pens/pencils, scratch paper, and poker chips or something else to represent food, and any terrain (including nest structures) that you want to put out. Last but not least, you'll need something to represent your bug army--usually the cheap plastic dollar store bug bags. Bugs are placed in functional groupings based on their shared characteristics for game terms. Players can field colony insects, bees, aphids, beetles, carnivores, flying carnivores, spiders, flying raiders, slugs/snails, worms, caterpillars/grubs. These groupings serve as a common language for players to understand that different models are capable of different things. Bugs are rated in a number of characteristics. If a statistic is marked "0", then that bug cannot use that characteristic. Leadership affects how well a bug can recruit other bugs to join his army (from offboard not the opponent's pieces). Defense and Attack are used during to determine individual combat attacks and represent a bug's ability to defend itself (shells, armor, etc.) and ability to inflict damage on an opponent, respectively. Movement is a straight translation to inches per turn movement allowance. Wounds is the number of hits a bug can endure before being removed from the game and Gathering represents how well a bug collects resources. There are six phases in a turn. What a bug does during one or more phases during a turn can limit what it can do in other phases. For example, a bug with raiding skill can do all of the following in a single turn: Raid, Move, Attack and Gather. Phase 1 is Maintenance/Raiding. This is a logistics phase that requires players to feed their bugs (unfed troops simply leave the battlefield in search of food---never to return). Bugs capable of raiding can feed themselves, provided there is food available to them. Phase 2 is Movement. You can move your bugs up to their movement allotment in inches. Some bugs can move faster than others (snails and slugs being the slowest in the game). Terrain affects movement, too so moving across a featureless plain on the gaming board produces faster movement than, say, climbing a hill or moving through leaf litter (jungle). Phase 3 is Construction. Only bugs with engineering ability may use this skill. Tunnels, caches and hive areas are different constructions that a bug general can have his troops with engineering abilities to construct. These structures help defend his army and the ever important food supply. Tunnels ease friendly movement and restrict enemy entrance into the nest. Hives grant defenders an advantage during defense of the nest and each hive in a player's control adds a bonus to his ability to recruit new bug enlistees---after all, hives are considered the sign of a successful bug civilization. Caches serve to store food and to aid in defending food from invading bugs. Spiders also have the ability to build traps to catch enemy bugs. Recruiting is Phase 4, during which bugs with leadership attributes can attempt to add more forces (randomly drawn from the bug collection off table). Successful dice rolls, with bonuses applied if the recruiter wishes to use food as enticement, allows the player to add additional bugs to his army. Attack is Phase 5 and usually takes place at close range of 1 inch or less (aphids can squirt acid at up to 6"). Attacking involves an attacker and a defender (duh). Attack bonus equals the defender's Defense score subtracted from the attacker's Attack score (yes, negatives are possible). This bonus is then applied to a 2d6 roll that is compared to a quick table. Results range from no effect, to fleeing, to multiple wounds being dealt out. Gathering is the last phase of a turn. Bugs capable of gathering simply roll dice equal to this stat. The result represents the amount of food they have collected for use next turn or storage. Games may be scenario driven (a sample scenario is provided) or "open" where each player basically does his/her level best to completely wipe out the opponent. Victory objectives such as kill the enemy general or destroy/steal half the enemy food supply are very helpful in focusing the game on more than hack and slash (though those games are fun, too). Overall, a solid game with a nice logistics phase. Although the rules are not written for a gameboard per se, Bug Strife would very easily convert to a large hex board or terrain map and in my opinion benefits from playing on this type of pre-measured surface. It returns the game to a more boardgame like feel and helps minimize measurement fudging and arguments associated with measuring tape errors.