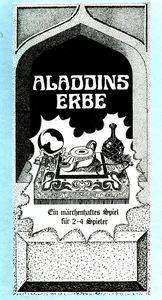 The players have to possess as many valuable treasures from Aladdins heritage as possible at the end of the game. At the beginning the small treasure cards are shuffled and then put on special fields on the board. Subsequently, the small definition cards are put on the fields at the side of the board. The active player throws all four dice and uses the result, to move two of his figures. In order to receive a small treasure card, two figures must face each other and the treasure card must lie between them after a movement. If the sum of the two figures together is just as large or larger than the numerical value of the small definition card, the treasure may be taken up. The player looks at it secretly and puts it down before him. Each player may have only one treasure of the six different kind of treasures. If a player takes up a second small treasure card, he decides afterwards, which of the two treasures he keeps and which he gives to a fellow player, who still doesn't possess the appropriate card. Apart from collecting small cards, later in play players increasingly duel each other. If a figure reaches the field of an opposing figure they fight a duel, if they have the same kind of treasure. The aggressor chooses whether he would like to make a duel with or without treasure cards. In a duel without treasure cards each player throws a dice and adds its result to the value of his figure. The attacker wins, if he has a higher total result than the defender. In the duel with treasure maps the attacker selects a treasure sort, which both players possess. The opponents uncover their treasures, and add the result of a dice throw and the value of the figure. The attacker wins again, if he has a higher total result than the defender. The loser is banished and the figure is again placed in front of the suitable entrance and must be brought back into play from there. The game is over, when all players possess the six different kinds of treasure. The small treasure cards are uncovered and the individual numerical values of each treasure are multiplied by the numerical value of the small definition cards. The player with the highest sum total wins.