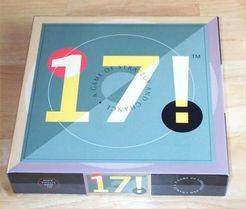 The game board in 17! consists of three home spaces for each player and several "regular" and "safe" spaces connected by paths. On his turn, a player rolls two dice and moves two of his seven pieces (5 pawns and 2 queens) along the paths from space to space. Each piece moves a distance equal to the result of one of the dice. (Instead of moving two pieces, a player may move one of his two queens a distance equal to the sum of the dice.) A player may capture an opponent's piece which is not in a "home space" or in a "safe space", by landing on it, which earns a point. The goal is to occupy the opponent's home spaces. Each such occupied space gives a player one point. Occupying all three yields an additional two-point bonus and ends the round. A new round ensues; if a third round is needed, the game ends when a player reaches 17 points.