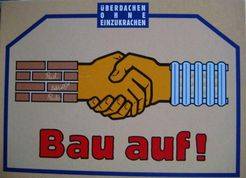 Bau auf (build it up)! Each player is a craftsman and builds his own house. But who can build a house exclusively with doors and shelves? Players are missing many kinds of building material, which has to be traded with the other house owners. Thus one exchanges a door for a heating or a plug socket for a tap. In that way the house is gradually finished. But the game takes a twist, as a player has to set a column in his house whenever he throws a six with the dice. With the fifth six one receives the ceiling plate of his house and continues to build on the first floor. Whenever one player has the first house finished (after the completion of the first floor) the game ends, but the finishing player does not necessarily have to have won. For each complete room the players get points, and whoever has the most points wins the game. Bau auf! is set in the former GDR and gives a funny insight with which problems people had to cope in that time, when they wanted to build a house.