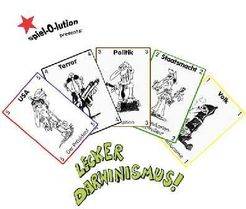 Lecker Darwinismus is a satirical game where players play sets of 3 card on the table representing the people, politics, terrorists and the USA. By playing actions cards of one type higher, players try to win sets played by the other players. In the end, players score for card won from other players plus the sets collected they still own. The illustrations of the game as well as the theme reminds of classic satirical comic books. First offering of this new designer/publisher