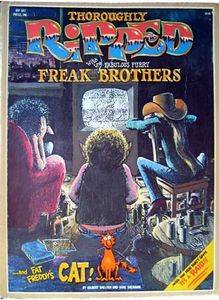 I keep this game in the cardboard box you can make from Jefferson Airplane's "Long John Silver" album cover. It's appropriate, I promise. I assume it's published by Rip Off Press, who made the comics. In fact, I suspect that the game was bound into a collection of Fabulous Furry Freak Brothers comics. The rule sheet looks like I cut it out of a magazine. Frankly, I don't remember. You may speculate as to why that is. The game dates from about 1979 or earlier, I think. The game is a roll-and-move extravaganza. Your goal is to get the most points or the least points (your choice). If you reach 86 points, you are out of the game (there is a Eurogame-esque point track around the perimeter). Eighty-sixed, get it? Never mind. You must supply a movement token for each player, a counter for each player's score, and three six-sided dice. Roll three dice on your turn, and move into one of the rooms. Once you have entered a room, you roll the three dice again and refer to a chart for each room that gives you points or lets you draw a card. There is a stack of cards for each room, so that Fat Freddy's room can be different from Freewheelin' Franklin's Room, and both are different from the Living Room. Very important to the theme of the game. Sample card from Fat Freddy's room: "You unwittingly puncture Fat Freddy's water bed, sending a torrent of water into the apartment below, and causing a COMPLAINT and giving you FOUR points." When three complaints have occurred, a RAID is the result and each player rolls the three dice to reach the exit. Those who do not are busted . It's reminiscent of the mechanic from Escape from Colditz. There are also three special guests to the party, represented by three special cardboard foldup pawns. The Movie Star, The Famous Author, and the Crashing Bore. You can use leftover movement (once you're in a room) to move these pawns. They block other players. You can also get three points for loitering in the hallway, which is the kind of thing that proves this was play tested. Actually, reading the rules now I'm not too sure how it ends or how somebody wins. But the artwork is cool and I remember enjoying it whilst simultaneously enjoying something else, if you know what I mean.