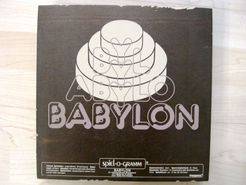 Babylon is a game, played in a 5x5 grid, in which two players use limited resources to build lines of towers, aiming to achieve a certain pattern in which the towers are built. Players take turns to place one of their discs to start 3-disc-high towers, which must be built with the biggest disc at the bottom and the smallest at the top. Players may place their discs onto their opponent's. Alternatively, players can take their turns to move a tower or the top part of it to another position if the tower's topmost piece is theirs. The goal of the game is to build and move the towers such that a line (vertical, horizontal, or diagonal) of three towers exists, in which a player has his or her disc in the middle section of the center tower, one top disc at one end of the line, and one bottom disc at the other end. When a player has achieved such a configuration, he or she wins the game.