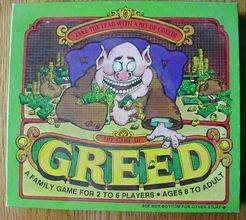 Each player starts with $100,000. Deal the all the cards to the players evenly. The players lay out the cards dealt face down in front of themselves. Each player in turn flip over one of their own cards. If the card has a money amount on it the player gains that much money. A player who flips over a "Loser" card is out of play for the round. Flipping over the third of the four "Jackpot" cards earns the player $500,000. Flipping over a "Greed" cards lets the player take a card from another player. The player may then ask for any amount from the player from whom the card was stolen. A called bluff will earn the victimized player the requested amount. The game continues until a winner with one million dollars is declared.