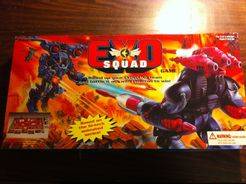 Based on the popular Cartoon Series, game components consist of the following: 15-by-15 inches Mounted Colorful Map Board; RULES sheet folded in half; a Set of Color Markers; 4-Mover Stands; 4-DICE-(2-Mover, 2-Battle); 2-Colorful "Shields"; a Set of Stickers to apply to the DICE and Mover Stands; a Set of EXO-Squad Character Cards. After assembling the necessary components, the youngest player will begin by selecting a Color and Set of matching Chips, then Roll a Mover DIE and proceed clockwise around the board. Where you land will determine your action for your turn. During play you could land on a space that allows you to do one of the following: RECRUIT; EXCHANGE Cards; TAKE a Card from either a Player or the deck; ROLL AGAIN; or BATTLE on either VENUS, EARTH, or MARS. The object is to collect 1 of each different EXO-Squad members Cards, have a CHIP on each Planet, and defeat PHAETON in a final Battle. Very nice production value for devotees of the genre.