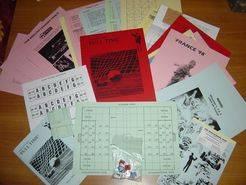 Solitaire football (soccer) game with a lot of charts and die rolling. Team and player's statistics available season by season. Owzat Games now has the rights for this game. In ' Full Time', we attempt to reflect the overall nature (pattern) of the game, while still limiting playing time to about 30 minutes per match. We still do not reproduce every pass and tackle, but the action which unfolds on the stadium card is a compressed version of the whole game, including those intriguing midfield battles, the constant probing at a tight knit defence and the sudden and decisive counter attack that produces a goal against the run of play. We have also devised a system that makes player identification quick, clean and painless and have incorporated Ebb and Flow where the initiative passes from one team to the other throughout the match. Added to that we have ensured that tactical formation changes really do turn things around, although Initiative is automatically handed back to your opponents as the price of reorganisation, have stolen some of the better ideas from ‘Soccer Replay’ and ‘Final Score’ (We’re entitled!) including the use of Fast Action Cards and have ensured that previously published Extension Sets for those games can be easily converted to use with ‘Full Time’