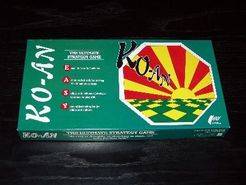 Richard Breese in Sumo 16/17/18: The Ko-An board comprises of thirty six octagonal green spaces, interlinked with twenty five square yellow spaces and surrounded by a red border. Each player has six octagonal and five square playing pieces and plays with either the black or the red pieces. To start the game each player's pieces are placed on the nearest two 'rows' to that player, on the spaces the same shape as the pieces. The object of the game is to get any one of your own playing pieces onto the opponent's back row. All the playing pieces can move onto either the octagonal or the squared shaped spaces, however they can only move forward, not sideways or backwards. It should be noted that as the squared shaped spaces do not touch each other, a player cannot move directly from one squared shaped space to another. In addition, octagonal shaped pieces can capture any of the opponent's pieces standing on octagonal shaped spaces and squared shaped pieces can capture any of the opponent's pieces standing on square shaped spaces. Considering its simplicity, the game can develop in a surprising variety of ways. For example, pieces of both players may bunch up on one side of the board, several 'skirmishes' may occur all over the board, or a large stand off may arise across the center of the board. This variety adds to the attractiveness of the play.