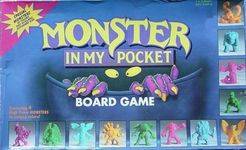 Another in the "Spinner" category, the game includes: a colorful mounted mapboard; 4 Soft Plastic "Special Monsters"; 48 cardboard "Monster" cards; the "Spinner"; and the Rules. The mapboard depicts 4 "Arenas" of combat-Ice Caves, Volcano Pit, the SWAMP, New York City, &amp; the center starting place. There are special spots on the board such as Force Field, Transporter, and each "Arena" has one spot directing the player to ANOTHER "Arena". The players lay out the "Monster" cards randomly onto the game's spaces. Then they move around and "Battle" the Monsters they land on and if successful, claim that Monster's Card. Each card has strengths and weaknesses depending on where that card is located in one of the "Arenas". The player with the MOST cards, once the last one is battled for, is the winner. The Spinner could also make a player GAIN or LOSE a card to another player. There are many more NEON color Monsters that were sold in separate sets and collecting them all should be even MORE fun for the lil ones. I first started getting the sets for my Nephews and THEN discovered this game for THEM! There are some truly bizarre figures such as the JOTUN Troll, which has 10 or more heads, the VISIBLE invisible man (EVERYONE should have THAT one!), HANIVER-looks just like a GIANT Gremlins disembodied Head, Spring Heeled Jack (maybe DISCO version?), MANTICORE-Man's Head w/multiFANGS-Lion's forepaws-Eagle haunch-Scorpion/Pincer tail, Baby YAGA (what? no TEEN angst ridden type?), TRITON-MerMAN, COCKATRICE-Griffin like with Snake body, BIGFOOT! the BEAST...&amp; Great BEAST, lots of your well known garden variety MONSTERs &amp;...RED CAP(?)-I bet HE turns out to be bright...NEON...GREEN! LOTS of FUN for EVERYONE! WHOA!...I believe THIS predates PoKeMoN, them copyright infringement...so &amp; sos!