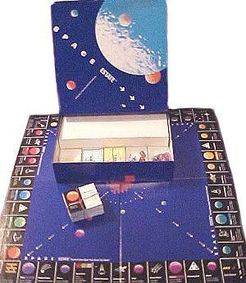 Sub-title:"the Real Estate Game that's out of this WORLD" M-onopoly in SPACE, but only in OUR Galaxy! Game components consist of: a colorful mounted mapboard with various "Space" properties; a long single-side printed Rules Sheet; thick cardboard "Properties" cards; a set of Money denominations; translucent "Space Stations" chips; 2 8-sided DICE; a set of "Discovery" cards; 5 Cardboard money holders; 6 LEAD tokens-a Space Shuttle, Soyuz Space Station, Apollo Spacecraft, Lunar Rover, Astro/Cosmo-naut, and Lunar Lander. I HIGHLY recommend painting/coating the tokens to prevent unhealthy LEAD effects for those folks so concerned. Dipping or Spray coating with a "plastic" type product is best and 3 coats should be sufficient. Play is similar to games of this ilk and the game ends once the FIRST player to lose all their money and be forced into Stellar Bankruptcy is declared. The winner is the remaining player with the most money. It has some special effects such as allowing players to move where they like when landing on a Space Shuttle space and paying the TRANSPORT fee. Other special spots include: Astro Bonus; Black Hole; Fuel Base; Halley's Comet; Meteor Storm; Mission Control; Solar Roller; Space Lotto; &amp; Space Sickness. There are special rules for just 2 players including receiving extra money &amp; 3 "Claim" cards prior to commencement of play. Nice and different approach from all the Terran bound versions of games like this.