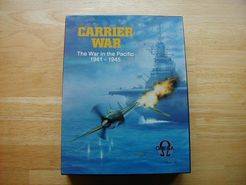 Carrier War is a complete simulation of military operations in the Pacific Theater from December 1941 to April 1944. Players have supreme command of the land, air and naval forces of either Imperial Japan or the United States and her allies. The scale of the game is strategic with operational overtones. The game is designed for two players, but can be played solitaire or by teams of gamers. Expanded by: Carrier War: the War in the Pacific 1941-1945 – 1944-1946 Expansion Kit