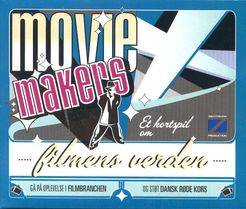 From the box: "Movie Makers is a card game about the life behind the camera in the movie making business. A game in which you are smoking cigars and playing against friends and family trying to make the best films so you can receive the most precious statuettes. Gain an insight into the world of movies delivered with new anecdotes and old tales." Danish Red Cross has created "Klub 10" which gives away 50.000 kroner (about 7.000 euro) to ten Danes. They will try to invest this money and the profit goes back to Red Cross. This year (2003) the money has been given to Peter Aalbæk, manager of the film company, Zentropa. He and his team have made Movie Makers, which are made in 10.000 copies.