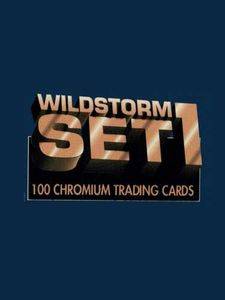 Wildstorm Chromium Set One is the first card set published by the newly created Wildstorm Cards. It hit the stores in 1994. The set comprised of 100 chromium cards, 9 refractor cards and 15 autographed cards. It features artwork from Wildstorms fledgling artists including Jim Lee, Scott Clark, J. Scott Campbell and Brett Booth among others. The flip side includes details of Wildstorms main heroes and villains, and included a set of 10 stats per character which can be used to play a game. This game is currently available for play on gatling Engine. The adaptation features both the chromium front of the cards and the flip side with the stats with a customized card back based on the Set One logo. The stats featured on Wildstorm: Set One eventually evolved into the popular Wildstorm Collectible Card Game. Although published by the same company, these two games are not compatible with each other. Online Play CCG Workshop (no longer available)