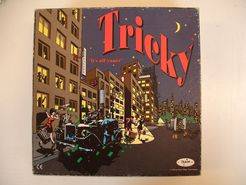 A Dutch game. Each player controls a mobster gang consisting of one Boss and 20 members. A player can win if all other bosses are eliminated or by occupying one side of the board and playing the appropriate card related to that side. Players have the option of either moving or cashing money: Pieces can move on foot or up to four can move faster by car. When either one of the gang is on a "Take a card" space, follow that instruction. Cards can be good, or not really, at times. When stopping at a space occupied by rivals, a shootout occurs. A six sided die (two blank sides, two times one and two times two) is rolled until only one gang is present in the square. Players eliminate whatever they roll, a blank being a miss. After placing the boss on the board all gang members and cars have to be purchased. Money can be cashed if playing pieces occupy squares in front of nightclubs or restaurants. They can gamble by rolling the die if they occupy one or more casino spaces. Most money is made when a gang succeeds in smuggling a barrel of alcohol from the owned brewery to one of the bars. Controlling the police comes in handy as well. The board consists of a grid with streets and blocks divided in a North, East, South and West side. The gangs come in six colors. Bosses are depicted with a portrait while gangsters are black silhouettes. All have a nickname and no two are alike.