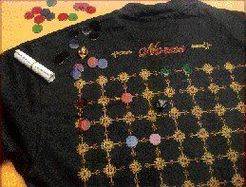 The boardgame of strategy &amp; dice played out on the back of your Game/Shirt. The quest is to align Charms, your playing pieces, 4 or 5 in a row by alternating dice and free moves. The intermix of plays allows you to thwart your opponents, build a stronghold, complete your path, and win the bout. The game was created for boardgame enthusiasts who want a boardgame that is 'at the ready'. Dice, Charms, and Instructions are all kept neatly in a Velcro pocket. Your shirt has a printed 'Plat' on the back with numbered 'Sites' which is the playing surface. The object of the game is to align 5 Charms in a row, in any direction or 4 when there are four or more players. The opening move is Norns--when the player rolls the dice and places a 'Charm' on the corresponding 'Site'. (for example, a player rolls a 2 and an 8. He or she now has the option of placing a charm on 28 or 82.) ‘Bumping’ can occur when an opponents charm already occupies the number rolled. The current player can bump the opponents charm out of play and replace it with their own. Play continues to the left until all players have played their Norns. The next round of turns is the 'Free Move'. On their turns, the players can choose any open site on the plat. Either building a path of 4 or 5 in a row or blocking an opponent. ‘Gazorping’ is a capture move where a player must complete a path with two opponents' charms in between. The opponents' charms are removed. The player has the option of ‘Sliding’-- moving one, and only one, of their charms into the vacated sites left during a Gazorp.