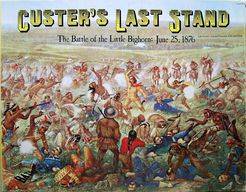 The Mapsheet is 21 1/2 inches by 27 inches and is Light GREEN overall, with GREEN, BROWN, and Dark BLUE graphics. There are a Terrain Effects Chart, Turn Record, Points Record, and Combat Results Table on the Mapsheet as well. FROM the Rules Booklet: "The Map board shows the section of the Little Big Horn River and surrounding area where the 7th Cavalry engaged the plains Indians in combat on June 25, 1876." The Rules consist of an 8-Page Booklet with Errata on the back and 2 of the pages are a Historical Sketch with Designer Commentary following. There are Unit Counters Samples, an Abbreviation List of the many Native American names, and Optional Rules as well as various "what IF..." events, such as "What If...Custer had GATLING GUNS &amp; the 2nd Cav. Regt.?" or "What If...Custer had NOT divided his Command?" There's about 11 altogether and they can affect gameplay in varying degrees. There are 120 Game Counters including some blanks, you use the Blanks for the TURN and POINTS record keeping. Each Counter is a Silhouette of a RANK for Leaders, mounted Cavalry Company, Scouts, Runners, Infantry Co., Pack Trains, Gatling Gun, 12lbr. Napoleon Guns, Entrenchment markers, Sitting Bull, Indian Camps, Agency Indians, mounted Cheyenne, Sioux, and Arapahoes Native units. There are NO dismounted/horse-holder RULES and NO rule against the Native player singing War-chants or Death-songs for fallen troops. Basically, the Cavalry player has to SPOT the Indian Villages and send off a RUNNER to bring on the forces of GIBBON and TERRY to aid in the destruction of the NATIVE forces. The Indians have to prevent this by intercepting the runners and score points by destroying the ARMY units as well as for exiting units off the SOUTH board edge.