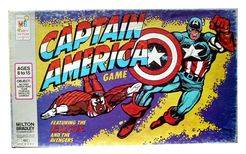 From the rules: "Be first to land Captain America and the Falcon at Satellite Lookout." "Captain America, our hero, is a symbol of all that is good, true and honorable. He whips ruthless super villains and crushes evil and corruption. Clothed in red, white and blue, with a star on this chest, Captain America carries, as his only weapon, an indestructible shield. In this game, Captain America and his companion, the Falcon, are helped by their Avenger friends and hindered by their enemies. Try to be the first to overcome the tricks of the super villains and reach Satellite Lookout." Basic Spin-and-move game mechanics. Each player has two pieces (one for Cap and one for the Falcon). Spin and land on an Avenger square and move ahead X amount of spaces. Spin and land on an enemy square and be stuck there until you spin a pre-set number. First to get both pieces to the end (Satellite Lookout) wins.