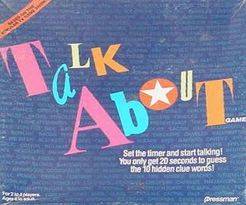 Players talk as fast as they can in 20 seconds to guess the 10 hidden clue words that are all related to the “Subject” word displayed at the top of the card displayed on the game board. The first team’s number of unguessed words determines how many clues the second Team will get to see in their attempt to guess a new “Subject” word. For example: Team A guesses 7 out the 10 words under the subject of “Pizza.” The total score for this round will eventually be 7 points, but we don’t yet know which Team has won those points… In our example, Team B is allowed only three clue words (10-7) on a new card to guess what the “Subject” of that card is. If Team B correctly guesses the new Subject from those clues, they win the points for the round (7, in this case). If Team B fails to identify the subject, Team A wins those points. The game continues with Teams switching roles--Team B will try to guess the 10 hidden clue words on a new card. Team A will follow with using a limited number of words to guess a new Subject. Talk About is a faithful adaptation of an Canadian television game show, whose gameplay seems to have been inspired by the board game Outburst!.