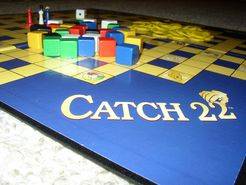 I originally 'tasted' Catch 22 at one of Major Fun's soirées, where it was an instant hit. Players have to move around a multi-path board by the throw of a die landing on jackpot spaces and collecting 'gold coins' (at least 22 of them....) before they attempt to cross one of several finish spaces with their bounty in tow. Unfortunately, once you have coins, you become a target (when you land on another player, you get their gold). Each player has five plastic 'blocker cubes' that he can place on empty spaces. These blocks stop everyone but that player from continuing along a particular path. Besides the spaces where gold is available, there are those one can land on to switch places with the player of your choice and spaces that allow you to take a blocker cube off the board, which basically means it's not over till it's over. The board's multiple paths give at least a few options on each turn, unless an opponent has blocked your way. And don't worry if somebody's nabbed your gold. Revenge is sweet!