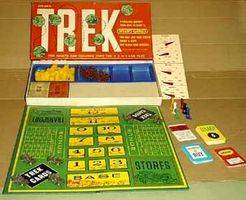 Trek is a fairly straightforward 'expedition' race in which the object is to travel from you base camp to camp number twelve. The most appealing elements of the game are the little plastic mules, jeeps and storage crates that are required for the journey. Mules &amp; jeeps are needed for movement; stores are used to sustain the expedition. Additional components include the game board, a sales price indicator, money and a deck of 52 cards. Players start with a sum of money and four cards. On his turn, the player must first pay his expenses either with cash or by expending a store. He then plays one (sometimes two) cards and follows the instructions. An 'Authority to Buy' card permits the purchase of one type of commodity (mules/jeeps/stores); the price of these items starts low but steadily increases with demand. Award cards give the player free commodities or allow cheap purchases from a rival. The most common cards, however, are the Camp cards. These are numbered from one to twelve, and playing an appropriate Camp card and transport item allows advancement within the same or subsequent group of camps on the board. If the player has a jeep, he can advance to two camps that turn provided he has two suitable Camp cards available. Money is earned upon reaching a new camp, and the turn is completed by drawing back up to four cards. By moving onto an already-occupied camp, you become the 'guest' of that player which forces him to pay for your upkeep as well as his own until one of you moves away. The winner is the first person to arrive at camp twelve.