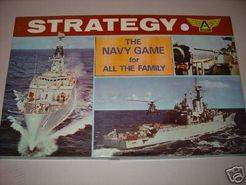 想玩 拥有
Strategy: The Navy Game for All The Family

The object of this light, naval game is to out-maneuver one's opponent and land your troopship on enemy territory, while preventing one's opponent from doing likewise. Each side is equipped with 1 troopship, 4 destroyers and 2 cruisers. Turns consist of ship movement and combat when applicable. There is no dice rolling (all attacks occur when an enemy ship is simply within range).