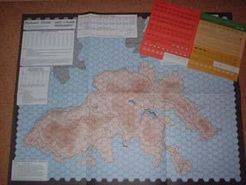 Company-Platoon level. The Imperial garrison of Hong Kong knew that they could not hold out against the advancing Japanese army. But if they could delay the Japanese at Hong Kong, then Singapore and Rangoon would have better chances. The Japanese must force a landing on Hong Kong Island and defeat the British, Indian, and Canadian troops deployed there. 300 counters, 20 x 24 map, 12 pages of rules. Ziplock edition only.