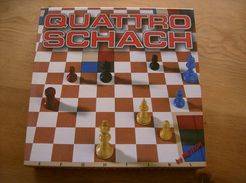 Quattro Schach literally means "Four Chess", indicating that it is a chess game for four players. However, there are some variations in this version which are immediately apparent when looking at the board. The board is 14x14 squares and has a variety of coloured spaces. In the middle are four squares, each of a player's colour, and in the corners are 3x3 grids used to store combinations of an opponent's captured pieces. The movement proceeds the same as with chess except under the following circumstance. When a player captures a certain combination of three of the opponent's pieces, that player's King is able to move 2 spaces at a time. If another combination is captured, the King may move the three spaces (which is the maximum). The game ends when one of two conditions is met: If a player is checkmated or if a player can get his/her King to the center square of his/her colour. There are several variations to the game.