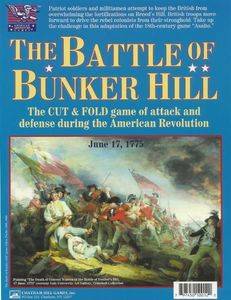 "Stand in the redoubt on Breed's Hill with Colonel Prescott, Joseph Warren and 1600 New England Militia as they await the British attack. The cannon fire from British warships in Boston Harbor has set Charleston ablaze, and dense smoke clouds the field. British general Sir William Howe has landed 2,000 British regulars, including the elite grenadiers and light infantry. The red clad soldiers form their lines. The assault begins as the redcoats advance uphill through the tall grass. Will the ill-trained Americans defeat the British attack, or will the redoubt be overrun by the forces of King George? Refight the Battle of Bunker Hill in this adaptation of an 18th century game. The game of 'Asalto' or the 'Assault game' is a variation on the game 'Fox and Geese'." 2 American playing pieces on 9 squares defend against 24 British pieces that set up on 24 squares.