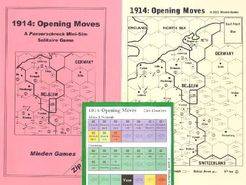 "1914: Opening Moves is a simple solitaire game where the gamer plays the German, and the game system plays the allies. The object of the game is to get enough victory points (VP) to win. VP can be gained by holding VP hexes on the western front (on the map, vs. the western allies), and through rolls simulating developments on the eastern front (vs. Russia). The gamer sets up, moves, and conducts the German offensives as he chooses. The game system handles the allies, who are generally on the defensive. Specific rules will instruct allied units about when/where to attack, how to retreat if a retreat occurs, and general movement directions. The game lasts a total of five turns, representing mid-August to early September, 1914, the most fluid period in the west during the Great War." Panzerschreck Magazine, Issue 7, Winter 2001-02. This solitaire "mini-sim" has a 5.5"x8.5" b&amp;w map of the western front totaling 87 hexes. 48 black on white or gray counters need to be mounted for play.