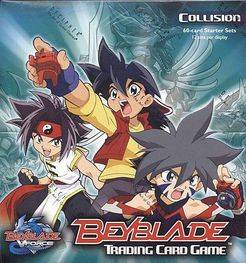 A TCG based on the television show/toy line Beyblade. The game simulates tops battling in an arena. There are two different levels of play, one for young children and a more advanced game for those who want more depth. Each player starts by taking one Blade card and placing it face up in front of him/her. Each Blade has its own "spin strength". You count that number of cards from the top of your deck and place them face down in a "spin pile" under the Blade card. The spin pile is very important, since the object of the game is to run your opponent out of spin by removing all the cards in his/her spin pile. Players take turns initiating battles which go back and forth until one player cannot make a play. Then players determine how many cards will be lost from the losing player's spin pile using symbols that match up on the tops of the cards. The advanced version uses card text to take the game to a deeper level.