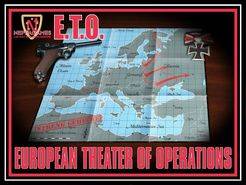 NEPPAGames: European Theater of Operations or ETO is a World War II Game of Grand Strategy Created by NEPPAGames. Do not mix it up with another game by the same name from TSR/ SPI or the latter Decision Games. NEPPAGames: ETO's historical simulation of the European Theater during World War II provides the framework where players are free to pursue their own strategic course of action. Each action has both short term and long term economic and military consequences. How players react to these consequences in relation to their own strategy will ultimately decide their fate. Six different games (three Campaigns and three Scenarios) are available right out of the box, allowing players to select a game based upon their interests and available time. Game turns are seasonal, each representing a three month period. The map board, hard-mounted, depicts the WWII battlegrounds of Europe from France to Russia, and from Norway to North Africa to the Middle East. While the interaction of all the different aspects of NEPPAGames: ETO is complex, the game is designed with simplicity and maximum playability in mind. On an Avalon Hill complexity rating, ETO's complexity would be about 7. NEPPAGames: ETO™ uses a zone-based area movement system for ground and air units. The use of a zone or area-based mapboard significantly increases playability. Since each hex covers less ground than a zone or area, hexed base games require more playing pieces. More playing pieces require more time to move them around, which is what the game wanted to avoid in the first place. The mapboard measures approximately 2ft x 3ft (or 24"x36"). Stacking limits are imposed. Terrain effects on combat are considered. Terrain and map features include mountains, swamps, beaches, fortresses,overwater crossings, ports (both beach and coastal), capital cities, special Russian defense and factory zones, oil, and more. Warfare Production Points or WPP's (Pronounced whips) are the currency of NEPPAGames: ETO. WPPs pay for everything from Declarations of War to Unit Construction. Something that is similar in concept of Building Resources Points (BRPs) in Third Reich, The Rise and Fall of from Avalon Hill. Represented in NEPPAGames: ETO are the forces of Germany, Italy, Britain, France, Russia, the United States, the Axis Minor Allies, and the armies of almost all neutral countries are depicted in the game. Each country's army is unique, with a fixed force pool of various unit types which are either available at start or available but unbuilt. Additional units may become available at historically appropriate times. Units include infantry, artillery, armor, air, naval, airborne, and U-boats. Each unit has different capabilities and differing attack and defense values. The units that will come with the game will be cardboard counters. Ground combat features both normal combat and armored breakthrough and exploitation. Air units within range of a battle can lend their weight both on the attack and in defense. Air superiority is most often a requirement for success on the battlefield. Attacks can be made in the face of a heavy defense, but success is not guaranteed, and often, a heavy price must be paid. Naval units are required for amphibious invasion, transport, shipping of troops and currency, shore bombardment, and strategic warfare. German U-boats can launch attacks against the steady stream of incoming convoys bound for Britain or attempt to sever the Murmansk convoy routes. As time passes, Allied ASW forces gain in both numbers and effectiveness. NEPPAGames: ETO will have you engaged in a titanic clash between Allied and Axis forces on old and perhaps new battlefields of WWII. The outcome is up to you. The design goal was to combine the best elements of several existing board games (including but not limited to Axis and Allies, Third Reich, Advanced Third Reich, General Patton, etc) into a very playable, very historical package. The game will have appeal to several categories of gamers: 1) Current Axis and Allies players looking for more historical and less ahistorical play (i.e. "the stack"), 2) Former Avalon Hill gamers who enjoyed the historical accuracy and gameplay but wished for less complexity and more playability, and 3) New gamers wanting to play a great new WWII strategy game. Game components include: 2ft x 3ft Beautifully Rendered Mounted Map Board 20 page Game Manual 8 page Campaign and Scenario Booklet that includes six different games you can play right out of the box 442 Superbly Detailed Die-Cut Counters 9 Counter Bags 18 Force Pool Cards for use with the appropriate Campaign or Scenario 1 Turn Sequence Sheet 2 Dice Game Box