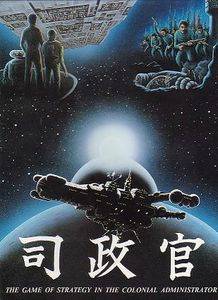 Complexity level 8 on Tsukuda's 1-6 scale (1=easiest).. Um, apparently that rating scale goes to 8. At any rate, this game is complex. Game length is stated on the box as 4-25 hours, and is strategic in nature. Based on and inspired by Mayumura Taku's 'hard science fiction' novelette and novel series whose name is "Shiseikan". This is an attempt, according to the designer, to make what he considers a 'true science fiction game', instead of the usual robot-anime SF games released in Japan before then, which he considered to not have as much variety ('items'). "Shiseikan" is a kind of colonial administrator who must control balance among colony, native aliens, and army. This game covers a original episode on planet Roseia. This game must be played with 4 people who each is Shiseikan, colony, natives, and army. Everyone has very different ability and purpose in the game. Very advanced game at that date. Very innovative and truly original work.