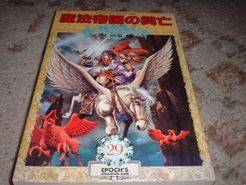 想玩 拥有
The Rise and Fall of the Magic Empire

Alternate title: Mahou Teikoku no Koubou An ambitious mix of the simulation and role-playing styles of games. The game is for 1-6 players, depending on the scenario chosen. The game uses a map separated into 36 land areas and 6 sea areas. Each player controls a hero, and travels over the land gaining followers and hiring bodyguards and employing armies. There are dungeons constantly appearing on the map, and parties of adventurers can explore them. The armies are used for battle with each other over land (not in dungeons). The game includes 6 sheets of counters and 200 cards for a wide variety. There are stacks of spell cards, item cards, monster cards, and quest cards. There is also a random event chart in the rulebook, and your heroes can even get married. Monsters are not always simply a set of attack/defense numbers, they can have special abilities, such as magic use, charm, and the like. There are dozens of scenarios, with different goals and many with some modifications to the rules (whether or not armies are used, for example). Most involve getting victory points by completing quests.