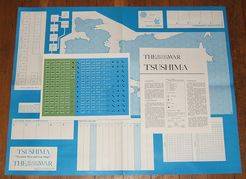 Tsushima is a strategic game of the naval war between Russia and Japan, 1904-05. Individual ship counters range the map, searching for the enemy, and when encounters occur, engaging in combat. Tsushima is a companion game to Port Arthur, which covers the land campaign of the Russo-Japanese War in similar detail. Both games were available in a single package, The Russo-Japanese War, which contained the combined game rules. Contains: rulebook 176 counters 1 map (source: the rulebook introduction and user's description)