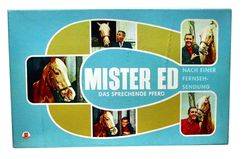 Merchandising of the American television show. Each player has a Mister Ed TV show card and must collect all the corresponding scene cards for that TV show. This is accomplished by rolling dice, moving around the board, and collecting cards at the appropriate spaces. After the cards are collected the player must move his pawn to the stable to win. The scene cards contain such hilarious quotes from the show as "Yes, I'll take good old Addison any day" and "No, don't touch it. It hurts."