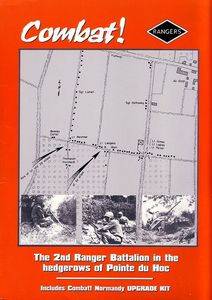 Combat!Rangers recreates the battle of the 2nd Ranger battalion in the hedgerows of Pointe du Hoc on a tactical level. It contains version 4.0 of the Combat! system rules, which can be used with the earlier games in the series, Combat! Normandy and Combat! Stalingrad. Contains over 450 die-cut counters, 19" x 21" map sheet, six scenarios and a complete Combat! Normandy upgrade kit.