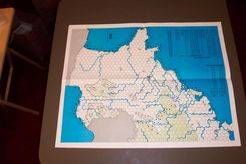 "1944 is an historical simulation game of the World War II D-Day landings and the events which followed it. It place you in command of the armies and offers you the chance to duplicate or even change history. Actually, 1944 is three different game in one: the Historical Game (the actual 1944 invasion), the Bolero "Mini-Game" (a hypothetical 1942 landing in France) and the "Overlord '43 Mini-Game" (a proposed invasion for 1943)." Full-size hex-map of France, white with blue, green, black and gray coloring. 92 avocado-green Allied counters, and 90 'Luftwaffe-blue' German counters. Rules seem to be on the low complexity side about like the early AH and SPI-Quad games.