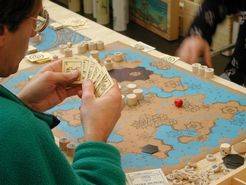 The sinking of Atlantis is said to have been over 11,000 years ago. Thousands of books published around the world rely on only one source: the account by the Greek philosopher Plato, who wrote of it around 350 BC. On the island of Atlantis, there was the capital city of the same name in the center along with nine other cities. The island was divided among the ten sons of Poseidon and Clito. Although the island thrived for hundreds of years, it eventually declined into tyranny and immorality. Eventually Zeus sank the island with earthquakes and floods in a single day. To win the game, the players struggle for the crown of Atlantis. The winner is the player who succeeds in entering the temple of Poseidon in the very heart of Atlantis with his crown. He becomes the new king of all Atlantis. This attack must happen as quickly as possible before the island sinks.