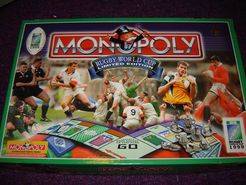 A limited edition Monopoly game based on the 1999 Rugby World Cup held in the United Kingdom. Variations on the origional theme takes the palce of the houses and hotels being replaved with terraces and stadiums. Players get the opportunity to purchace rugby teams and the stations have been replaced with stadiums. As with all themed Monopoly sets the tokens are unique to the game. Rugby 1999 offers players the chance to play as the Webb Ellis trophy, a rugby player or the goal posts. The boot token gets an upgrade to a "Rugby Boot".