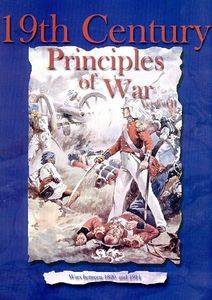 Miniatures rules for 19th century conflicts, covering a period from roughly 1820-1920. Movement is via an action point system, and unit capabilities are based around a single strength value which is used to determine melee, firing and morale. Different weapons apply a multiplier to the strength. The strength itself has a random component added to a base strength, the latter being derived from the unit's quality. Thus the exact competence of your units is unknown until you try them in battle. Army lists in the rules cover all major, and many minor, conflicts in Europe from 1820 to 1920, whilst a separate army list book covers conflicts from the rest of the world, ranging from well-know ones such as the Zulu War and American Civil War through to the Yucatan Revolt and Dutch expansion in the East Indies.