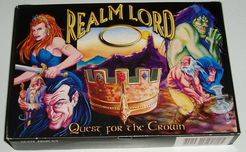 Players recruit heroes, who go on quests to earn 'hope stones,' which accumulate to victory. The game has several types of cards: -6 Realms, which are always in play and serve as locations for the game. -6 Lords. Each player is represented by a lord, who grants that player a privleged move. (a Lord also works as a hero) -heroes, who have four attributes (valor, might, craft, and magic) and a special ability each. Heroes can travel from realm to realm and attempt quests. -Quests. Each quest is based on one attribute. If the acting hero's score plus a die roll exceeds the quest value, the hero completes the quest. In addition to earning hope stones, Quests have special powers that take effect either while they are in play, or when they are completed. -Treasures, which attach to heroes and grant special abilities. -Action cards.