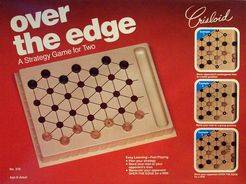 Each player has seven pawns on opposite sides of a board with 31 spaces joined hexagonally. One end of the board, perpendicular to the two starting pawn rows, is a pit which players try to force their opponent's pieces into. A player can move any of his pawns provided they are adjacent to at least one other friendly pawn. A player's group can also drag away and control adjacent opposing pieces as long as the opposing piece is kept away from it's allies. Win by putting three of your opponent's pawns "over the edge" of the pit or by separating all opponent's pawns thus immobilizing them.