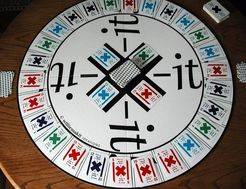 X-it! is simple mix of "Spite and Malice" (aka Skip-Bo) and solitaire mechanics. There are two decks which each have four suits with 20 cards in each suit. One deck is used to establish a large tableau on a circular gameboard which has 26 card slots around the circumference and four slots forming a central "X". The second deck also contains 8 wild cards. Seven cards are dealt to each player from this second deck. The goal is to lay off all the cards in your hand onto one or more of the four "X" cards. The twist is you must be able to dump your entire hand on a single turn. In lieu of this option, a player must try to play a card onto one of the 26 ring cards. Ring and "X" cards must first be "opened" by playing the exact same card on it. After this, cards of any suit may be played on open cards in runs of ascending or descending order. At the end of a turn, a player must play a card even if he was able to discard. If a player puts a card into a run that could have been used to open a card, he loses a turn and must take a penalty card from the player who catches him in the act.