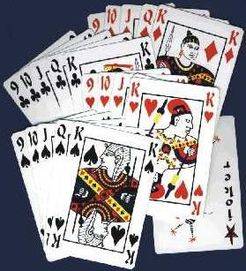 A Nomination Whist variant that is played with an odd deck of cards. The deck contains the four regular suits, but each has 2 Kings, 2 Queens and 3 Jacks, 3 '10's and 3 '9's. There are also four jokers, which count as the highest trump. At the end of each hand, the players score a point for each trick made, with a bonus of ten if you make exactly as many tricks as you bid. If you bid zero and made no tricks, you score 20 points - which makes zero very valuable. The game ends when any player reaches 77 points at the end of a hand: the player with the most points wins. Each hand starts with dealing out the entire deck. Each player uses one face down card as a bid for the trump suit. If one suit has more cards than any other, this suit becomes trumps for the hand. If not, the hand is played as No Trumps. There is a clear trade-off here between getting the suit you want as trumps and retaining as many cards as possible in the suit. However, it can also be a useful way of reducing your holding in a particular suit. Or even throwing away a high card that would otherwise win a trick, if you are going to bid zero tricks. Once the trump suit has been determined, each player, starting to the left of dealer, states how many tricks they expect to take. This gives an interesting advantage to the dealer.