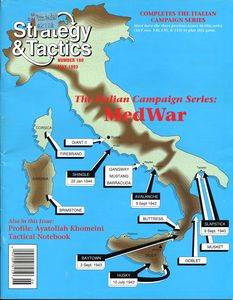 The Italian Campaign Series: MedWar, is the fourth &amp; final game in the series. This game adds a strategic map of the Mediterranean Sea around Italy and adds full Air and Naval operations to the game system. The game cannot be played by itself... ownership of Sicily, Salerno, and Anzio, are required. This game was first published in Strategy &amp; Tactics magazine #160. Numerous scenarios and campaign games are provided. Each one uses counters and maps from all of the preceding games in the series. Victory is determined by the scenario being played. Eleven pages of additional errata and clarifications for rules, maps, and counters are also included in the S&amp;T magazine for all of the games in the series. Game Scale: Turn: 1 to 2 days Hex: 5 miles Unit: Company to Brigade Game Inventory: One 22" X 34" mapsheet One countersheet (240 1/2" counters) One 20 page rule booklet