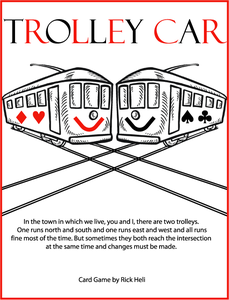 A card game of the "Climbing" family, but cards are laid out along a trolley track instead of being piled on top of one another à la Crazy Eights. Using two standard 52-card decks of playing cards, the two trolley lines, i.e. Red and Black, compete to be the first to cross contested intersections. The players speed them along by trying to be the first to get rid of their trolley cars (cards). In addition, each player places a bet on which line will make the most progress before the game is over, but to do so must use a card of the very type which would help the cause.