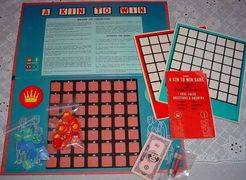 Based on the game show of the same name, A Kin to Win is a combination trivia/connect 4 game. One player acts as Master of Ceremonies (MC) and alternates asking questions of two players (or teams). Players first indicate, on a 7X7 grid, where they would like their answer. They may choose any square to extend their own marker's lines or to block their opponents. The unknown element of the game is that the MC does not tell the players whether the answers they gave are right or wrong until 14 questions have been asked. When a player (or team) thinks that they have four correct answers in a row, they shout "I win!". If they are right, the collect $500; if wrong, they are told which answers are wrong and play passes to their opponents. The game is played over a number of rounds... the team with the most money wins.