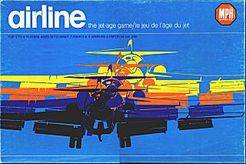 Airline is a very simple 'roll and move' game with a few twists. Players are competing airlines trying to collect money for 'landing rights' at various cities around the world. You can only collect this money if you have a "route" (either direct or indirect) from your home city. Players start with $100,000,000. Money collected for landing rights varies depending on the size of your airline, indicated by the playing piece (prop, jet, or SST) that you have in play. Once paid, the landing rights to a city may be challenged by paying the owner an additional $20,000,000 and then rolling the dice... high dice wins (ties go to the current owner). If a player cannot pay a debt, he is bankrupt and out of the game. Play continues until only one player is left and is declared the winner.