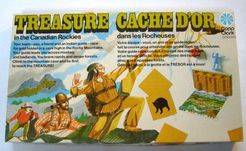 Each player has a team of three figures, two adventurers and one guide. The guide is used to collect "Grub Stake" cards which allow you to climb the mountain and get the treasure. Your adventurers are used to climb for the gold and to delay other players. The game is interesting in that it has a molded plastic wall which must be climbed. The square 'Grub Stake' cards are placed into slots on the wall to allow a players figure to ascend the mountain. Movement is by roll of two dice which may be split amongst any of your three figures. The pieces move in a straight line only... no turns are allowed during a move. If a "Bear" card is discovered while exploring, it can be used to send an opponent back to start or delay him while he's climbing for treasure. The game is entirely dependent on the roll of the dice and the cards gained through random draw. Nevertheless, it's a fun little race game with a 3D board.