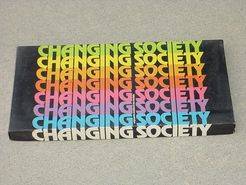 A Monopoly clone with a twist... you are never forced out of the game... you just become your descendant, go back on welfare, and keep going. Components restrict the game to six, but any number can play. Players keep going until a set time limit is reached (I suggest at least 2 hours) or when the there is only one player left in the game (if played without descendants). If descendants are being used, the game is never ending and can go on indefinitely. The highs and lows of society are portrayed by spaces on the board. Businesses may be bought and sold, players may get a higher education, join a Co-op, become a thief, enter the military, etc. An additional random element is in the form of 'Change' cards. With the draw of a card you can become an alcoholic, get busted and sent to prison, become a parent of quintuplets, etc. Because there are only 54 of these cards, they seem to come up again and again... expecially when six are playing. Elections make the game the most fun. During an election, players are encouraged to put issues to a vote... majority rules. This allows aspects of the game rules to be changed or outright ingored! Because of this, interesting things can happen, for example: elimination of taxes or a military coup d'etat.