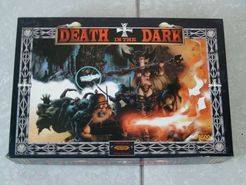 Published in 1998, and based off of The Universal Soldiers tabletop miniatures rules by Colin McClelland, Paul Sharpe &amp; John Laing, this game is similar to Mordheim, in its fantasy skirmish theme. The theme in this game, however, is that of rival mining companies fighting for success in the mines/dungeons/caverns "surrounding the underground holdings of Arkonis." The base game comes with two sides: the Dwarven Prospectors vs. the Vanir (dark elves) and their "terrible" spider minions. The game features upgrading units, hiring mercenaries, and buying weapons and equipment between scenarios. The combat rules are more streamlined than that of Morheim, and the campaign game is more fleshed out. You can buy add-ons to the home base of your mining company that can do numerous things for you. Things that increase income, security, etc. Many battles take place in the corridors of the mines, but the battle can be taken to a player's home base if needed. As such, players map out their home bases as they purchase rooms (e.g. jails, vaults, storage, etc), fortifications (e.g. gates, walls, traps, etc), and other assorted upgrades on to them. RAFM has released other races to play, including Orcs, Undead, and "Reptiliads" (lizard men) to name a few. In addition, the game works very well with the line of dungeon scenery from Dwarven Forge. The playing time noted above should be considered the time for one or two scenarios, including the in between campaign management. But, like most games of this type, it can go on for as long as you like.